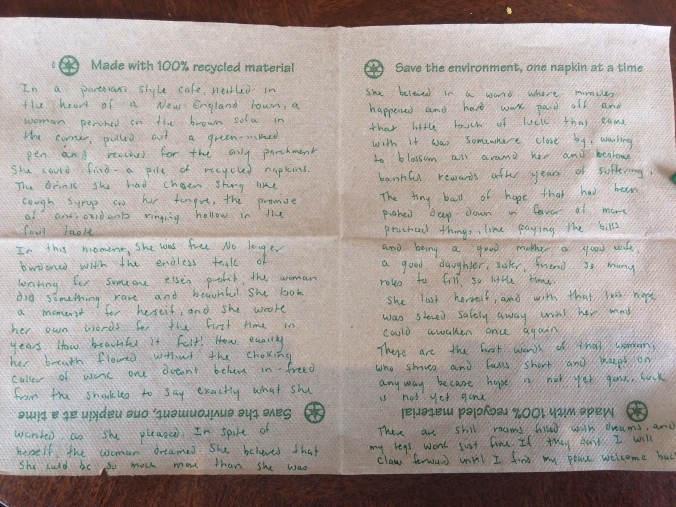 Over twenty books written. All under gagged contracts.

This week, I gave up ghostwriting.

The weight off my shoulders…it’s beyond belief. All my creative energy these past two years has been sucked up by work that wasn’t my own, that I often despised even as I wrote it.

Today I stepped outside and wrote my own words for the first time in years. Here are those words:

In a Parisian style cafe, nestled in the heart of a New England town, a woman perched on the brown sofa in the corner, pulled out a green-inked pen and reached for the only parchment she could find-a pile of recycled napkins.

The drink she had chosen stung like cough syrup on her tongue, the promise of antioxidants ringing hollow in the foul taste.

In this moment, she was free.

No longer burdened with the endless task of writing for someone else’s profit, the woman did something rare and beautiful. She took a moment for herself and she wrote her own words for the first time in years.

How beautiful it felt! How easily her breath flowed without the choking collar of work one doesn’t believe in-freed from the shackles to say exactly what she wanted, as she pleased.

In spite of herself, the woman dreamed. She believed that she could be so much more than she was. She believed in a world where miracles happened and hard work paid off and that little touch of luck that came with it was somewhere close by, waiting to blossom all around her and bestow bountiful rewards after years of suffering.

The tiny ball of hope that had been pushed deep down in favor of more practical things, like paying the bills and being a good mother, a good wife, a good daughter, sister, friend…so many roles to fill, so little time.

She lost herself, and with that loss hope was stored safely away until her mind could awaken once again.

There are still rooms filled with dreams and my legs work just fine. If they don’t, I will claw forward until I find my peace.